At the wooden kitchen table in his rambling home in the horse country of Waccabuc, N.Y., Mike Berland, a crisis manager, public-opinion researcher and veteran political pollster, assessed the so-far lackluster campaign performance of Jeb Bush, the Republican presidential candidate.

Mr. Berland, who has worked for the campaigns of Hillary Clinton, Bill Clinton and Michael R. Bloomberg, is certain he has identified Mr. Bush’s key problem: He is not eating enough fat.

“The Paleo diet is not helping him come across as an effective leader,” said Mr. Berland, 47, referring to the diet emphasizing unprocessed foods that is favored by the former Florida governor. Mr. Bush, a meat-and-potatoes conservative, needs to eat things like avocados and almonds throughout the day to sustain energy, Mr. Berland said. “The debates happen late at night, and by then, he barely is holding it together.”

He also has some advice for the Republican front-runner, Donald J. Trump: Eat more vegetables and less simple sugars, Mr. Berland said: “He’d be less frenetic. Look at him, his cortisol is raging.” (Cortisol is a hormone that in part helps regulate blood sugar levels.) 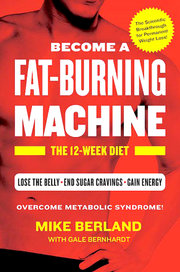 What alterations should Mrs. Clinton make to her eating habits? he was asked. “I’m not touching that,” the politico responded, politically.

Mr. Berland, the chief executive of Edelman Berland, is sitting out this election cycle to focus on his corporate clients, like Facebook, CVS and Starbucks.

He is also trying to take on an unlikely mantle: weight-loss guru offering new hope to serial dieters, of which Mr. Berland was one. He has written a diet book, with Gale Bernhardt, a former United States Olympic triathlon coach, called “Become a Fat-Burning Machine: Lose the Belly, End Sugar Cravings, Gain Energy,” to be published this month by Regan Arts.

For years, Mr. Berland said, he struggled to overcome his own weight problem, which persisted no matter how many different diets he tried and how much he exercised. “I was the fat guy who does lots of sports,” he wrote in the book. Among the tchotchkes in his house, which include pictures of him posing with presidents, senators and (less explicably) Fabio, are the sneakers he wore when he ran the New York City Marathon, which he had bronzed.

A few years ago, he turned his professional savvy on his personal issue. “The candidate was me, and the election was getting control over my weight,” he said.

As when managing a scandal for a public figure or trying to create an effective message for a politician, Mr. Berland interviewed experts — in this case, doctors, nutritionists and fitness trainers. He put together a team that helped him understand and address his body’s difficulties with burning fat and accessing the energy for the sports he loves. He lost nearly 70 pounds and this year completed the Ironman World Championship triathlon in Kona, Hawaii.

Along with meal planning and exercise, Mr. Berland lays bare the difficulties of dieting when your job calls for frequent travel, as well as the emotional costs of judging self-worth based on a number on a scale. “In politics, and we all learned this from Bill Clinton, you need to show people you are personally connected to the problem,” he said. (It’s the empathy, stupid.)

The book is likely to get a big boost from Dr. Mehmet Oz, the television personality who will present Mr. Berland and his diet to viewers on the “Dr. Oz Show” in early January. “Mike Berland is the uber-fixer, the guy everyone goes to when things have gone wrong,” said Dr. Oz, who sought Mr. Berland’s counsel this spring after a group of physicians admonished Dr. Oz for recommending questionable medical products and treatments on his show.

“He’s looking at this as a political campaign,” Dr. Oz said of Mr. Berland. “He’s got the data. He’s asked the key questions to find out what is it that we assume about the process of losing weight that is either hurting us or is wrong.”

As he would with a political message aimed at voters, Mr. Berland has market-tested his diet, sharing early drafts of the book with friends, relatives and colleagues.

One reader was Scott Flanders, the chief executive of Playboy Enterprises, who hired Mr. Berland to advise the company, and his research helped persuade Playboy to drop naked women from its pages. “He put us on a nudity diet,” Mr. Flanders said.

The two men will ski together in Colorado this month while on vacation with their families. “He’s going to tell me I need to lose 10 pounds, and somehow I won’t be offended and I’ll implement some of his suggestions, because Mike makes you feel like he’s totally invested in your success,” Mr. Flanders said. “Mike has a way of telling you your baby is ugly, but that he can help you make the baby less ugly, and somehow you don’t want to punch him in the face.”

Paula Moan, 52, a wealth manager in Indianapolis who has worked with Mr. Berland, began his program last spring after years of failed dieting. She said she had lost 61 pounds. “It’s relatable,” she said. “He said, ‘I’m just a normal guy who needed to lose weight and was curious enough to look into how to do it.’”

“He said he wasn’t going to speak to me again if I didn’t get on Facebook and join his secret fat-burning group,” Ms. Reuss said. “I said, ‘You’re not even going to talk to me at Nana’s memorial?’ He said, ‘No.’”

Ms. Reuss said she had since dropped 59 pounds. Mr. Berland calls her “my toughest candidate ever.”