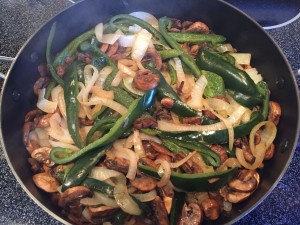 Many of us love grilled vegetables, but don’t always have the time to clean and chop them. To remedy that situation, I like to prepare a large batch of grilled veggies when I have the time. I can then put the extra veggies in the refrigerator for uses later in the week or I’ll freeze the extras.

Ingredients for a large batch

2 – Peppers (all the same kind or mix and match red, green, yellow, orange and poblano)

Preheat a pan on medium heat. Melt the butter in the pan.

Put all the vegetables into the pan and cover it. Cook the veggies until they are wilted, but maintain some firmness. Uncover the veggies and bump up the heat to medium-high. You’ll need to keep a close eye on the process once you turn up the heat.

I’m looking for a browning of the veggies before I turn them once or twice. Once they have that grilled-brown appearance, I remove the pan from the heat. Cover the pan and let the veggies rest in the pan for a couple of minutes. The resting process melts the browned veggies from the bottom of the pan.

Stir so the brown sauce is even across the veggies and serve, or cool and package for later use.

They will freeze nicely in quart freezer bags.