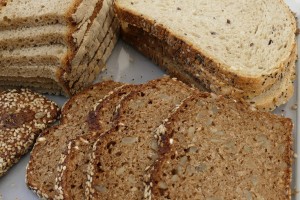 Great question, Pam F.! People that have a gluten sensitivity or celiac disease need to avoid gluten (which is found in wheat, rye and barley products.) For this population, gluten-free is a must if they plan to consume grain products.

If you don’t have a gluten sensitivity, you’re better off with whole grain breads and pastas. Why?

One big reason is that gluten-free breads have the highest glycemic indexes (an index of how high blood sugar rises over the 90 minutes after consumption) of all foods according to Dr. William Davis. He says that “gram for gram, ounce for ounce, such gluten-free foods raise blood sugar substantially higher than table sugar and higher than wheat products.”